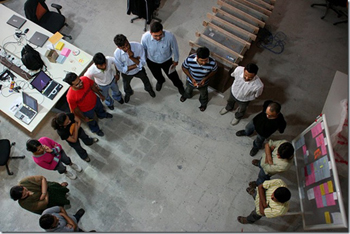 In the long run, going agile simplifies and streamlines communication, boosts productivity and even reduces stress on the team members involved. But we need to stay real here for a second: that effect isn’t instantaneous.

In reality, while agile methodologies deliver great benefits, they also require a learning curve for most teams and organizations.

The entire agile process can be likened to a dance: it looks great when you watch someone who knows how to do it, but before you look that graceful and confident, it’s going to take some time to learn the steps, and you may even step on a few toes.

What kind of timeline can you expect for your agile transformation ? How long will it take to go from agile zero to agile hero?

Every company – even every team – is going to be different. But, to give you a fair idea of what to expect, we’ll take a look at the example of WireDrive , a software development company that worked with cPrime’s agile coaches.


After the WireDrive team committed to the idea of going agile and went through their initial training, they were set to begin their very first Scrum Sprint (the project development cycle). In their case, each Sprint lasted two weeks.

Every company that transitions to an agile framework should estimate the amount of time and effort required to successfully accomplish a Sprint based on prior experience, generally using waterfall methods. It may take a number of Sprints under your belt before you can start making valid, educated estimates of what your team can truly accomplish using Scrum, which is okay.

One of the most enduring agile concepts is embracing failure; so don’t think for a moment that this time will be wasted. The WireDrive team learned a tremendous amount during their initial Sprints that improved each subsequent cycle. They reported feeling very comfortable with the Scrum practices after their eighth full Sprint, a couple months into the transition.

A big part of their comfort level came from embracing a new mindset. They began to see the value in breaking down requirements into tasks delivered incrementally over time.


Six months into their agile transformation, the WireDrive team confidently reported their first successful Sprint. All of the work they knew they were capable of accomplishing during the Sprint cycle was effectively completed.

This success was immediately followed by eight “failed Sprints” where that same achievement eluded them. Again, this is an ongoing learning process. While nearly all of these Sprints were technically “failures” based their goals, a ton of development work was completed during every single Sprint.

One of the greatest aspects of going agile is the emphasis the methodology puts on constant progress toward the end goal. WireDrive was certainly succeeding in that regard.


After approximately 30 Sprints, just a little over a year from the point of their initial commitment, the WireDrive team was consistently succeeding at reaching their established goals for each Sprint. Here’s what they and their customers noticed a year after going agile:

To learn more, read the WireDrive Case Study , or contact us about training and coaching to help get your company up to this level!

The Dojo Primer – What it Is, Why it Works, and How to Do It View Now