Cprime > Resource Center > Blog > Agile > What is the value of coaching? Is it required for an organization to be successful in Agile?

What is the value of coaching? Is it required for an organization to be successful in Agile?

Let us first define and standardize on what coaching is.

“Coaching is a form of development in which a person called a coach supports a learner or client in achieving a specific personal or professional goal by providing training and guidance. The learner is sometimes called a coachee. Occasionally, coaching may mean an informal relationship between two people, of whom one has more experience and expertise than the other and offers advice and guidance as the latter learns; but coaching differs from mentoring in focusing on specific tasks or objectives, as opposed to more general goals or overall development.” – Wikipedia And from an Agile Coaching perspective the Agile Coaching Institute’s framework is by the most recognized framework by many in the Agile community. The only thing I think it is missing is explicitly calling out Change Management – but I suppose that may be implied in the framework itself. 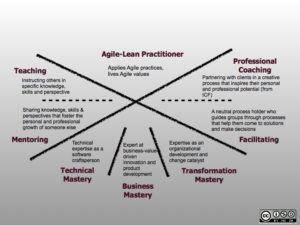 I personally believe most organizations do a poor job of a combination or all of framework: change management, mentoring, teaching, coaching and facilitating. And really most workers are not often taught those skills in university or in the workplace. When’s the last time your organization had a program to take a 21st century mindset of managing and leading knowledge workers with a coaching stance? And when those workers get promoted to management or leadership roles – it creates a vicious cyclical cycle where organizations are purely focused on optimizing for delivering for the immediate need – not focused on optimizing how to deliver. Not thinking long-term. And I believe this is where Agile Coaching plays a critical role – not only coaching teams, managers, and leaders – but also coaching to a strong base of how the organization can self-reflect on continuously optimizing delivery. So is there value in coaching? Absolutely.   I like to draw on my high school basketball days of when I was a coachee to explain this. Did I know how to play basketball at least on a very basic, fundamental level before I had a coach? Yes, I knew how to dribble, pass, and shoot the ball (actually through years of coaching starting in 4th grade). The goal of The Game was put the ball into the basket and prevent my opponent from doing the same; whoever had put the ball into the basket the most times at the end of the time-box of a single game won. Furthermore, I understood the rules of the game such as I couldn’t move with the ball unless you were dribbling it. But as a freshmen in high school I knew I can grow and hone my basketball skills through continuous discipline and continuous practice. My individual goals such as I want to “increase my free throw percentage from 70% to 80% this next season” needed proper coaching to help increase my likelihood of hitting my goal for the season. Techniques on how to shoot the ball, bending of my elbows, bending of my knees, proper shooting mechanics and mental ways to “block out” the noise were coached and guided to me based on my unique contextual environment (in this case my body, my arms, the level I was starting at, my already bad habits, etc.).

Could I have hit my goal without a coach?

Probably – but likely not as fast and a lot more cycles of experimentation of what worked for me would have been necessary. Now let’s exponentially increase the complexity and difficulty that coaching truly seeks to address. Basketball, like many sports is a team sport. In a team environment, you have every individual’s development goals but also the need to align toward one team goal and ensure everyone’s goals complement the one team goal. All while preventing team sub-optimizations and balancing the need for the team to grow and work together. Do you need a coach to help with this? Absolutely. Another metaphor to use is that a coach is like a conductor for an orchestra (and really the best leaders are too!). The conductor needs to intimately know each instrument but isn’t exactly playing each instrument. Making sure each instrument is playing in accordance and that each instrument is aware and support of the larger goal of the orchestra. Coaches’ Note: Often, I get asked can we do “part-time” coaching. For example, instead of having an embedded coach say four days a week – let’s have the coach only come in for Scrum ceremonies (really one time a week at most). I treat this as trying to cheat the psychological system of humans. Recent scientific research state: “On average, it takes more than 2 months before a new behavior becomes automatic — 66 days to be exact. And how long it takes a new habit to form can vary widely depending on the behavior, the person, and the circumstances…it took anywhere from 18 days to 254 days for people to form a new habit.” Source: http://jamesclear.com/new-habit

You get what you put in as effort.

If you only work-out one time a week then you’re not going to get the results you’re looking for. Or even if you work-out everyday for one hour – it doesn’t matter because it’s the other twenty-three hours that matter more.   Think about your organization today. Is everyone rowing in the same direction? What is even the “same direction”? Where do we allow fully autonomous team self-organization vs. areas where we can standardize on a set of practices and techniques to prevent sub-optimization? How the heck do you that across eight teams or scale that to three hundred teams!? Does my organizational culture promote transparency and psychological safety so we can get better together?

Whether you like it or not product development is a team sport.

Need Agile coaching? Talk to a professional for a free assessment