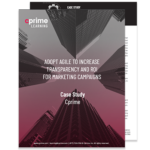 Like many marketing departments, Cprime’s team had limited transparency into the rest of the company. This created accountability issues, a disorganized backlog, and strained relationships with internal stakeholders, including product management and sales. There were many instances when the sales or product management team would request tasks to be completed by the Marketing team, but had no idea when or if they would be completed. Tasks lost in long email chains, or details forgotten over water cooler conversations became problems.

The team used a spreadsheet to keep track of requests and campaign ideas, but it was a free-for-all of what was getting done and when. This caused not only a lack of trust from outside stakeholders, but also internally within the department because there was no way to keep members accountable for their projects.

Due to the distrust, lack of organization, and poor use of time, there were no established methods to measure the success or failure of campaigns. It would take weeks, or even months, to execute a full campaign, which resulted in wasted time, dollars, and effort.

The solution started with three internal change agents, the Vice President of Marketing, the Marketing Manager, and a Marketing Specialist attended the two-day Agile Marketing Boot Camp. They were able to implement what they learned from the boot camp immediately into their everyday work routine before they even left the classroom.

Ceremonies and artifacts were the first Agile methods implemented. The team started conducting daily stand-ups and weekly planning meetings with Planning Poker. The creation of a team velocity chart, a formal backlog, a running Kanban board, and a digital marketing request system allowed the team to organize and prioritize projects. It also helped them break down and iterate complex campaigns to gather real-time data before releasing the projects to customers.

Marketing departments operate very differently from one another, so Cprime Learning’s Agile Marketing Boot Camp is intended to give teams a foundation in Agile Marketing methods in order to help them create their own “flavor” of Agile Marketing that works best for their teams.

Over the course of the last five years, the Cprime’s marketing department has evolved and developed their own, highly-efficient, “flavor” of Agile Marketing. They are extremely accurate at defining requirements and estimating the time and effort needed to complete tasks in a use case, allowing them to realistically determine what can be accomplished within a determined sprint. They now have complete visibility and transparency into what each person on the team is working on, how long projects are, and who is accountable on their team.

With the skills they gained from Agile Marketing Boot Camp, Cprime’s marketing department is able to launch campaigns, gather results, and make changes quickly. They no longer waste time on long projects that don’t produce return. Relationships with both product management and sales have drastically improved as well. With increased visibility into marketing activities and strategies, they have created an open-door, collaborative environment for the entire organization.

“It far exceeded my expectations. I believed that Agile would help, but I never expected it to have as significant an impact as it did.” – Traci Taylor, Marketing Director 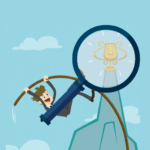 Discover how Agilent, the leader in life sciences, diagnostics and applied chemical markets, undergoes a… 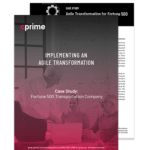 Highlighted Results: Reduction in turnover of development staff by 25% from the previous year Implementation of…