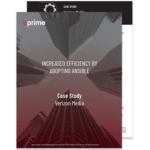 Learn how Verizon Media increased efficiency by 65% by adopting Ansible.

Keeping Up with Demand

Digital media conglomerate Verizon Media serves one billion customers world-wide across more than 20 brands. With such a large and continuously growing customer base, it is imperative that Verizon Media’s IT operations departments keep pace with the demands of the business and the market.

Director of Infrastructure and Platforms Engineering and Database Operations at Verizon Media, Ramesh, had two major challenges related to scaling the capabilities of his IT operations teams. His first challenge was to manage a continually growing number of servers with a lean, 11-person team. His second challenge was the need to minimize the amount of manual tasks his team was performing. Manually configuring a large number of servers made the work extremely time-consuming, error-prone, and at times not even feasible.

To combat these challenges, Ramesh made a commitment to improve his teams’ capabilities through automation. His goal was to have 100% infrastructure and configuration as code by the end of 2019.

After testing several tools, Ramesh and his team found the configuration management tool, Ansible, to be the solution for accomplishing such an ambitious goal. To ensure they utilized the full capabilities of the tool, Ramesh enrolled his team into a private, onsite delivery of Ansible Configuration Management Boot Camp.

Training up on Ansible

The course material in the two-day, Ansible Boot Camp was exactly what his team was looking for. The course demonstrated the flexibility and power of Ansible, and how it can be used to build and scale a highly reliable infrastructure for their environments and projects. The course not only taught the need-to-know basics, but advanced applications of the tool as well, through a mixture of lecture and hands-on lab activities.

Because their team had to manually configure almost four dozen servers across multiple data centers, they were particularly enthused about the sections of the course that dealt with increasing the availability of infrastructure.  The team also found a great deal of value from the course modules focused on installing and using Ansible Playbooks and improving CI/CD pipelines using Ansible.

Ramesh stated that the training has already made them around 65% more efficient:

“If there [was] a task that took about two weeks to complete, the teams have become more efficient reducing the timeline to one or one and a half weeks.”

The result of their increased speed was improved collaboration with other teams. Ramesh’s team used to do a lot of manual tasks, and development teams from different departments expected them to deliver infrastructure at faster rates causing manual errors. After taking the Ansible Boot Camp, their team is now able to keep up with the agility of their developers.

“Now it’s a win-win situation for both sides” said Ramesh.

The team continually takes incremental yet rapid steps toward their primary goal of 100% infrastructure and configuration as code. With the already vast improvement they have made so far, they believe they can reach this goal by the end of Q3 2019. 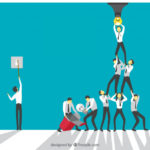