In Jira, the issue links module is a common way organizations link, clone, relate and specify relationships between issues. Most customers typically tag, flag and highlight dependent relationships between Jira issues. Identifying dependencies early is a challenge. Teams can easily miss out on opportunities to sequence their work to mitigate or avoid blockers.

As users look for enhanced Jira functionality to solve Agile process gaps, Cprime’s Power Scripts™ leverages automation scripts to solve Scaled Agile use cases. ALM Works’ Structure and Power Scripts™ for Jira work so well together because Structure allows a user to re-arrange issue hierarchies in Atlassian Jira according to what makes sense to their team; by status, priority, assignee or team. Using Structure in conjunction with Power Scripts™ allows users to conditionally process and display in a way that augments actionable information in the context of their structured hierarchies.

Our customers use Structure to help them plan, track and manage multiple-org levels, multiple teams, and multiple backlogs that all are striving to coordinate and execute their work on cadence. The power of Structure comes into play at scale. Structure allows the user to define and group organizational hierarchies in ways that pivot people, work and time according to lines of business, product, portfolio and program management levels. We found that at scale, Structure for Jira is critically needed to help customers understand how their organization is executing on the larger vision.

As you can imagine in a large Atlassian instance, the issue links relationship can compound, creating a lot of noise that displays every issue relationship type that exists in your Atlassian system. While this functionality provides a good way to specify dependency link types, it also makes it hard to understand and cut through the noise to identify the critical blockers that threaten your plan.

Identifying these dependencies early is a challenge. Sometimes teams miss dependencies and end-up losing an opportunity to sequence work around these blockers. Properly sequencing work eliminates mid-sprint productivity risks while one team waits for another team to finish their dependent piece of work.

The common complexities that arise from dependencies are:

Cross-team dependencies break sprint schedules forcing teams to start and stop work and push out ship dates Unanticipated dependencies that emerge too late and jeopardize team productivity, forcing teams to add more team members, break their plans or push the date Maintaining traceability and work item connectivity to parent items; throughout large scale projects on a fixed or variable cadence teams lose context on what and why they are working on Issue link relationships show you all or nothing relationship types with no way to cut through the noise to see critical blocker dependencies The biggest threat to your scheduled plans is not catching things early. But we found a solution to de-risk your sprint and release schedules with Power Structure.

Power Scripts™ is an Atlassian administrative toolkit that provides a framework for Jira Admins to implement scripted solutions such as workflow automation, integrations, custom fields, button actions, wizards and more

As users look for enhanced Jira functionality to solve Agile process gaps, we see Power Scripts™ leveraging automation scripts as a way to solve Scaled Agile use cases. Structure and Power Scripts™ for Jira work so well together because Structure allows a user to re-arrange issue hierarchies in Jira according to what makes sense to their team; by status, priority, assignee or team.

Additionally, using Structure in conjunction with Power Scripts™ allows users to conditionally process and display in a way that augments actionable information in the context of their structured hierarchies. 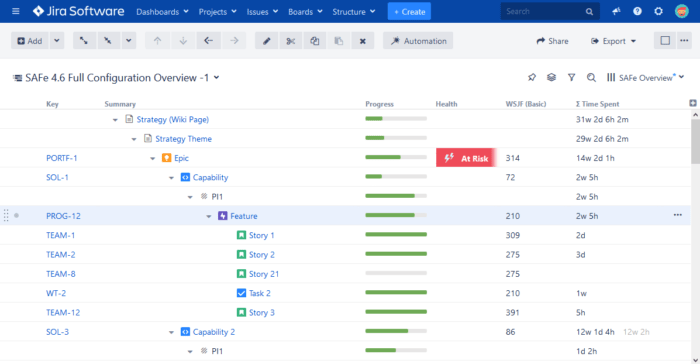 During a SAFe implementation, one Structure client, a leader in the retail department store industry, wanted a single visualization that showed not just the hierarchy of all their issues but the critical epic and story blockers. Using Power Scripts™, the customer was able to cut back the noise of all issue relationships and conditionally isolate just the epic-to-epic and story-to-story dependencies in and across teams with script automation that displayed this relevant and timely information in a scripted custom field and inline in the context of the Structure tree.

The Result: Adding this information allowed the project manager to see if the stories that were blocking epics in their hierarchy were resolved or not. That way, they could see the importance of issues through the hierarchy and could see at a glance if their team could start working on an issue, or if they were blocked and needed to assign their team to work on resolving that blockage or to de-scope the issue.

Due to the large number of smaller teams working closely together, this feature saved a lot of time in their daily stand ups. Without this collaboration of Structure and Power Scripts™ for Jira, it would have taken much longer to identify the roadblocks and clearly identify where attention should be focused.

Another Structure client needed the ability to understand how dependencies across other Jira projects would affect the sequence of delivery. Standard issue link functionality showed all connected link relationships – (ie. relates to, clones, blocks, etc) and visualizing every link relationship type inside a Structure tree resulted in teams complaining of a messy Jira instance.

Using Power Scripts™ and Structure, the teams were able to write a script which pulled back only the horizontal cross-team dependency picture.

The Result: Through scripting, the client was able to display only specific relevant linked issues without creating a messy Jira instance and preventing information overload.

Team members were able to see at a glance the overall big picture and the potential impact of how cross-team work would impact their schedule based on issues inside their projects.

Dive into dependency management with these tools