Richardson, merged with Sales Performance International (SPI) in late 2019, becoming Richardson Sales Performance. In doing so, they faced the issue of creating a single, collaborative team from the combined 350-person company. 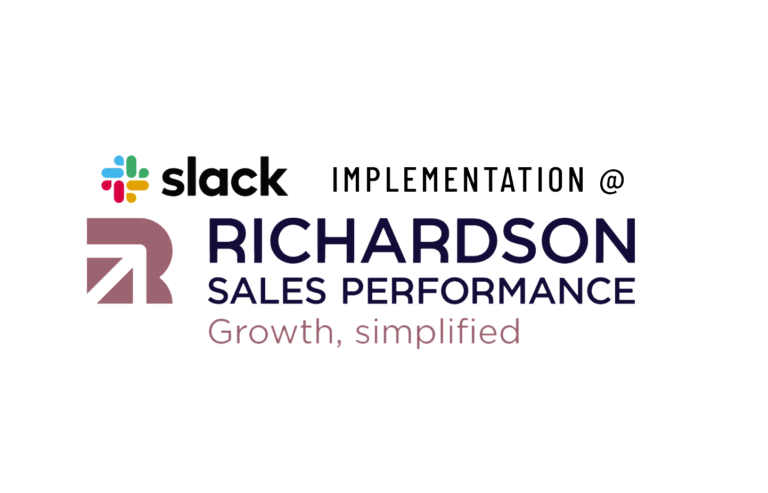 What happens when two companies competing against each other end up in a merger—and on the same team? Richardson, a Philadelphia company helping sales organizations improve results, had to grapple with this challenge when it merged with Charlotte, N.C.-based Sales Performance International (SPI) in late 2019, becoming Richardson Sales Performance.

“We had completely different technology products,” says Justin Walsh, Richardson’s CTO. “We were on Office 365, they were on Google. We were on SharePoint, they were on Box.” The mismatch of technology was fine for the short term, Walsh thought, especially since the two workforces would remain in their respective offices. But there was the issue of creating a single, collaborative team from the combined 350-person company.

“Slack became our glue,” says Walsh of the adoption of the channel-based messaging platform and its ability to help employees work as a team. And with guidance from Slack services partner Cprime, which helps companies successfully integrate Slack, Richardson Sales Performance accelerated its Slack rollout just in time for employees to shift to remote work. 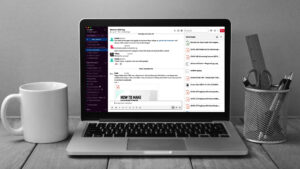 “With Slack we can collaborate and connect much faster than ever before.”
— Justin Walsh, CTO, Richardson Sales Performance

One Shot for Selecting the Right Tool

For much of 2019, Walsh was immersed in assisting with the upcoming merger. “Implementing new tools wasn’t a priority,” he says. Employees relied on Skype for Business and SharePoint for collaboration, but Walsh thought he could do better for his colleagues.

“Skype was OK for messaging, but that’s only a small part of collaboration,” Walsh says. “Setting up and managing meetings left a lot to be desired. And the collaboration tools for clients and vendors were subpar.”

In early 2020, Walsh chose Slack because it could be implemented quickly, would work well with all the different technologies in use at Richardson and SPI, and would allow employees to collaborate and communicate in one place. He also recognized that he had to choose the right tool the first time—he had new coworkers to sell on the platform.

“You only get one shot at a first impression,” Walsh says. “We wanted the user adoption to be enthusiastic, since our tools can only be as successful as people allow them to be.”

Given that Walsh wanted that first impression of Slack to be the best possible, he enlisted Cprime as his implementation partner. Walsh needed a team that knew the ins and outs of Slack configuration and integrations, as well as best practices to enable employee success on the platform. But there was more to Walsh’s choice of Cprime than the technical side of the Slack rollout: He needed a change management plan from people who knew how to optimize a Slack deployment.

“For many people (who came from) SPI, the launch of Slack was going to be their first impression of my team,” Walsh says. “And we’d already built up a lot of goodwill on the Richardson side of the business. We couldn’t take that for granted.”

Cprime helped Walsh and his team integrate Slack with Okta, Zoom, Google Drive and Box. Such integrations enabled the company to streamline workflows and fully leverage the tools they had invested in. Cprime also created channels, such as #hr for the newly combined company’s HR team, to drive alignment across teams. In addition, Cprime developed a communications plan for the Slack rollout as well as live training sessions and documentation for employees—along with lessons on Slack etiquette, such as when to send a direct message versus post in a channel.

The Slack deployment had originally been scheduled for mid-April 2020, but the early days of the Covid-19 pandemic forced Richardson and SPI employees to work remotely. Within just a few days, Walsh worked closely with Cprime to accelerate the launch of Slack in late March—just about the time when employees would need to stay in touch with one another and get to know their new coworkers.

“It was very fortunate we went down this path with Slack and Cprime,” Walsh says. “Because we’d prepared people for Slack, it wasn’t a huge shock, and they knew how to use it. In fact, they were excited about it.”

Given the tight timeline, Cprime stayed on the project with Walsh and his team to make sure the deployment went smoothly and that integration worked properly. Walsh and Cprime also brainstormed more channels to support the switch to remote work. For instance, there’s a channel that changes themes frequently; one month the theme might be a look at everyone’s home-office setups, another it might be encouraging users to share their favorite travel memories and dreams for future travel.

“We didn’t hear a single complaint about learning to use Slack,” Walsh says. “People were motivated to stay in touch with each other more than usual. Our company really came together on Slack.”

“This was the most successful user-adoption project I’ve ever done,” Walsh says of Slack. In the first week of the Slack rollout, more than 95% of employees became active on Slack—and that number hasn’t dropped in more than a year, Walsh says.

In a typical deployment, Walsh might deactivate previous solutions once employees became used to the new tools so that stragglers wouldn’t be tempted to keep using the old solutions. This time, he didn’t have to. “When I looked at the metrics, I could see that usage of Skype for Business had fallen off a cliff,” Walsh says.

More than a year on from the rollout, Slack has changed how Richardson Sales Performance employees communicate and the speed at which work gets done. 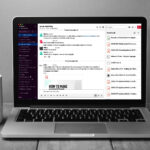 Slack to the Future: How to get the most from your tech stack 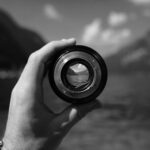