Project Management is the process of organizing, directing and measuring the work involved in a given project. It was developed as a means of managing the three interdependent factors that affect the outcome of any successful project: the scope of the work involved, the time-based schedule and the cost of necessary resources.

The roots of today’s formalized project management methodologies lie in ancient civil engineering projects. What began as a set of compounding “best practices” emerged in the 1950s as a distinct discipline applicable in an ever-expanding assortment of industries. In the IT sector, the utilization of project management in software development projects began as early as 1957.

The first formalized project management methodologies — often referred to as “traditional” or “classic” — were highly disciplined and plan-driven. They can be described as “predictive,” and essentially assume that all aspects of the project, and the future itself, can be anticipated and accounted for with thorough planning.

Traditional plan-driven models for software design, also known as Software Development Lifecycles (SDLCs) break up projects up into phases. A typical example might be:

Plan-driven methodologies work well for small, well-defined projects with a limited scope of work and few variables. Due to the IT industry’s rapid growth and progression, methodologies have had to evolve to get expansive projects with multi-million dollar budgets completed on time and on budget.

During the mid-1990s tech boom, critics of traditional methods emerged within the software development community. Over time it became apparent that rigidly defined, plan driven methodologies were not working. They tended to deliver projects that were late, featured poorly chosen functionality, or were low quality overall. As a result, a shift was made toward processes that ascribe to the general principles of lean development, specifically focusing on the elimination of waste and optimization of the way in which a team delivers value.

In 2001, a team of 17 software developers published The Manifesto for Agile Software Development. As stated therein, the guiding principles of Agile development are: 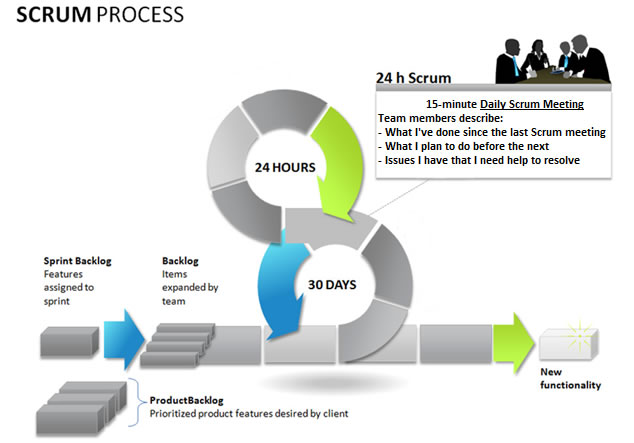 Individuals and interactions over processes and tools.

Responding to change over following a plan.

Underneath the umbrella of the Agile philosophy a series of specific process frameworks have subsequently emerged, including:

cPrime delivers more project predictability and higher end-user satisfaction with our Agile Development and Project Management services. We’re leading the way with Agile implementation and can help you transition your methodology to Agile development with Scrum.

To learn more about our Agile coaching consulting, Agile training and Agile staffing, please Contact Us and one of our Agile experts will be in touch shortly.

The Power of Vision Statements for Teams View Now