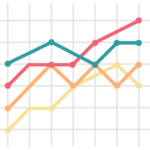 Much as a Burndown Chart shows work remaining, a Burnup Chart or Cumulative Flow Diagram (CFD) shows work accomplished versus time. While any of these metrics can be plotted for any span of time, Burndown charts are most commonly plotted for individual Sprints, while Burnup charts and CFDs are usually be plotted for Release cycles that contain multiple Sprints.

Burnup charts and Cumulative Flow diagrams are very similar–so similar, in fact, that they can usually be considered the same thing in practical terms.

For example, a Release cycle may have a concept of scope. A Burnup chart shows our progress towards the goal of completing that scope. Changes in Scope or estimates during the Release cycle cause fluctuations in the scope line, as shown in the example. At the same time, we show progress towards the goal by charting the amount of work completed to date. Ideally, the amount of completed work will rise to the scope line by the end of the Release cycle.

The Cumulative Flow diagram is very similar. It shows how much of our work (i.e., the effort associated with User Stories) is in different states, such as Completed or In Progress. In the example below, the Total and Completed curves shows the Release scope and Burnup of completed work, while the In Progress curve shows how much work is associated with Stories currently in development. Aside from formatting, the only difference between the standard Burnup and Cumulative Flow diagrams is that the latter adds a curve to show how much of the work is currently in progress. 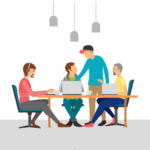 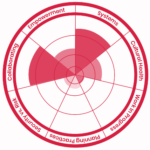